Quote of the day - I love Satan 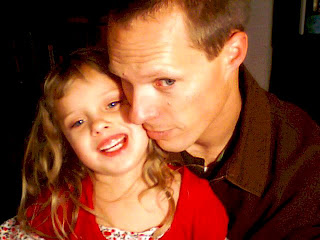 Melía was going through the motions of bedding down last night--a prelude to her hour of requests, potty breaks, talking to self and to knocked-out twin sister, playing and patiently enduring the silence before sleep sneaks in and takes her away.

With no visible provocation, she announced:

I was disarmed, not sure what to say. I'm not sure now what I did say. Maybe I said, "You do?"

"Yeah," she said, pleased with herself. "I love Satan!" She giggled, aware of the scandal of these words, but sticking to her guns.

Knowing Melía's heart, I sensed this declaration--dark as it may have sounded from other lips--was worth celebrating. "That's good, Melía. Do you think God loves Satan too?"

"No, He doesn't," Ashlyn protested.

"Really? I think He does love Satan. Because Satan is His child, and even though he does bad things, God loves him anyway, just like He loves us when we do bad things," I said.

"Everyone is His child," said Ashlyn.

Amen and amen to living in a universe run by Love big enough to encircle the old friend-turned-enemy who crucified Him.

And amen to living in a house with little hearts big enough to get it.

(Click photo at top or PLAY arrow at left to see a short clip of Melía speaking for herself on the topic of God's unconditional love.)

That's classic! I hope I respond as well as you did should that topic come up in our house!

Hey, if you're still around, blogging anywhere, would love to e-chat!! Just read your post about Sheldon vanAuken .

And I LOVE your blog, what I've read today... hope you're still at it, somewhere, although I realize by now, your precious little people have probably morphed into sullen mouthy teenagers, as we all do ;-). (Not to worry... the precious will come back!)