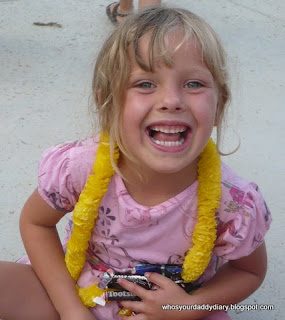 Tonight on the ride home from Thanksgiving, all girlies were asleep except Melía. (This is as traditional as today's turkey.)

Winding up the mountain, we were talking about how different kids spend different amounts of time in Kindergarten, depending on how ready their parents and teachers think kids are for 1st grade. "Some kids do one year of Kindergarten and some do two, Melía. How many years do you want to be in Kindergarten?" I said.

Part of me wants to normalize redoing Kinder if necessary. The twins are on the young side, after all. Another part of me says this to lay down the gauntlet and see them go for their studies as ardently as they go for playing dress-up.

"That's right," I told her. "Good remembering. " I had made a point of saying that this decision is not up to the 5-year-old. "But if it were your choice, how many years would you want to be in Kindergarten?"

"Do you know how many years I would want to be in Kindergarten?" she asked, making sure I still understood the question.

"How many, Melía?" I asked. I'd have put my money on "one." What kid isn't eager to be as grown up as possible as early as possible?

"Six years!" she said, exuberant. ("Tens of thousands of dollars' worth!" my Daddy-ears heard, despondent.)

But sticker shock aside, here's giving thanks for one great Kindergarten and for at least one girl who's not in a frantic hurry to grow up.

At least not today.
3 comments:

Email ThisBlogThis!Share to TwitterShare to FacebookShare to Pinterest
Labels: kindergarten, learn, Melía, thanks

'I will remember it again later,' she said 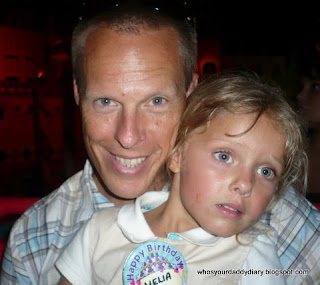 “While you’re sleeping, don’t forget how much I love you, Melía,” I told her.

(She hears this many nights, along with other valuable admonitions, such as, “Don’t eat yellow snow, Melía.” Some things just bear repeating.)

“I will not forget, Daddy.”

“But if I do forget, that’s OK. Because I will remember it again later.”

This rings in my heart like an eschatological prophecy of a time of trouble. She won’t forget, she assures me. But growing daughters and flawed fathers being who we are, it won’t be long before she will.

What will get in the way of the love? I wonder. Curfew? Homework? Careless words? Wardrobe? Other men? All of the above?

But my little prophetess assures me that the time of trouble will outlast neither my love nor her knowledge of it.

Lord, when she does forget, please remind me that it’s OK. We do that. We lose sight of what we've been standing on. Things loom larger than people for a minute. Ego pounds impatiently at the front door, and Love slips out the back.

But it is OK. Later, she will remember again.
1 comment: