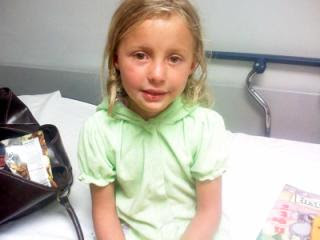 I cupped my hand under Brielle's face, pouring out apologies nearly as fast as her chin spilled blood. The drops were splashing now as they plopped into the swelling red pool in my hand, which sloshed as we cried our way across the sand toward the lifeguard tower.

We'd just been killing time on the beach, pausing our walk for some gymnastics while we waited for Melía to catch up. The somersaults went great, and led naturally into the headstands. I spotted Ashlyn's feet for her headstand, then spotted Brielle for hers. And when I did mine, helpful girl that she is, Brielle spotted me.

I didn't get the memo.

So that when my heel kicked up, Brielle's chin was waiting to greet it. I heard a sharp snap as the foot bone connected to the chin bone, separated by way too little soft tissue, and pounded her teeth together. It was a scary enough sound that the scream that followed it gave me a measure of relief.

At least she was OK enough to scream.

We walked across the sand, Brielle wailing, her Daddy wailing louder but without sound, sober sister Ashlyn in tow.

I wonder now, why was I making such a point of catching the blood? All those blood-borne pathogens trainings? Or a helpless father doing the only thing he could think of to feel slightly less helpless at that moment. Catch blood, and apologize ad nauseam.

"I'm so sorry, Brielle. I am so sorry. I didn't know you were back there. I'm so, so sorry. I was not careful enough. I should've looked back before I did my headstand. I'm sorry, sweet Brielle."

Through her sobs came this gift:

And it is OK. Now, at least. An hour in the ER, 3 stitches, a pop-sickle and a DQ ice cream cone later, she was s 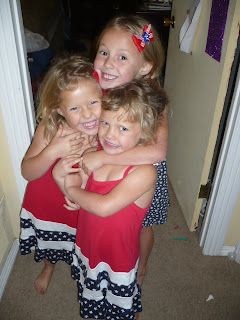 ewed up and feeling little pain. Yes, the water slide plans for the next day were off, and I'd found another way to sabotage swimming lessons. But mostly, she was fine.

Me? I'm still a little traumatized. I hate it when, after quantities of energy, bribery, coercion and scare tactics spent on stopping my children from hurting themselves, I hurt them myself. And then all I can do is catch blood and say I'm sorry.

But in the trauma, I'm thanking God for lifeguards and doctors who can do more than that. For wives who watch shots and stitches go into their brave daughters' gaping lacerations--and still love me. I'm thanking Him for popsicles and DQ that bridge trauma to treats, and for healing--of chins and hearts.

And I'm thanking God for little girls who forgive faulty fathers even while the wound is still dripping.
2 comments: